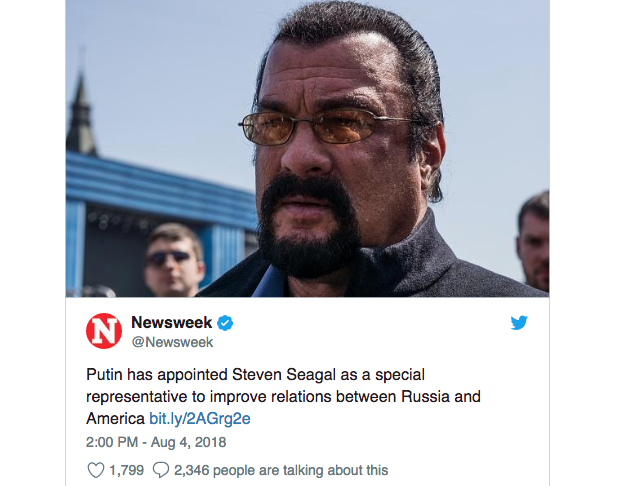 “Seagal will soon be taking on a new role. In 2016, he received a Russian passport from Russian President Vladimir Putin at the Kremlin. Putin has now made the actor a special envoy to the United States to look after humanitarian aspects.New Zealand Herald reports that the Russian Foreign Ministry announced the new role of Steven Seagal via a social media platform. His appointment won’t earn him a salary. However, he will be responsible for facilitating “relations between Russia and the United States in the humanitarian field, including cooperation in culture, arts, public and youth exchanges.”

As many people know, Steven Seagal was made famous by his movies, where he displayed some of the best martial arts ever. Here is a snapshot of some of his best fight scenes:

Steven loves martial arts as does the Russian President Vladimir Putin. He received his very own Russian passport from Vladimir Putin at the Kremlin. This was criticized in certain quarters. He has, incidentally, praised some actions of Putin like the annexation of Crimea. As a result, Kiev imposed a ban on Steven for five years because they felt he was he was a potential threat to their security.

Russia has now honored the actor yet again by naming him as special envoy to the United States. Serbia also offered him citizenship and wanted him to open a martial arts academy in Belgrade. He also has contacts with senior leaders of Chechnya and Belarus, and he holds Putin in high esteem. CBS News reported in 2014 that Steven said in an interview with RT, that he believed Putin “is one of the greatest world leaders, if not the greatest world leader, alive today.”